Lists with This Book. This book is not yet featured on Listopia. Community Reviews. Showing Rating details. More filters. Sort order. Partly because the art was just not that good, and partly because the stories was just not that interesting. Another thing in Deity, the inhabitants of the planets they are visiting are looking like this; a cross between men and chicken.

Hard to take them seriously. Sometimes they look kind of OK and sometimes I wondered if the person who drawn for instance Uhura knows what she looks like because she just didn't look like the Uhura I remember from the movies. I found the art often just crude to be honest not at all appealing. But fortunately, Enterprise in battle looked good. So that was a plus.

So, this was not the best Star Trek volume I have read, but not the worst either. It was just pages so I read it fast and I was happy that the last story was included because that made the volume more enjoyable. Thanks to Diamond Book Distributors and NetGalley for providing me with a free copy of this book in exchange for an honest review! Dec 10, Michael rated it liked it Shelves: collected-comic , netgalley , arc , read-in , star-trek. IDW's re-imagining of certain episodes of the original and still the best Star Trek has been hit or miss.

This latest installment, collecting issues 46 - 49 of the on-going series is no exception. The collection starts off with a re-telling of one of my favorite installments from classic Trek , "The Tholian Web. Unfortunately, this telling of the Tholian storyline doesn't really succeed on either level. The new twist is that in the re-imagined universe, the NCC has the ability to separate the saucer section.

So the Enterprise is in two pieces, trapped in the titular web, which I suppose should double the drama. Instead it merely isolates the characters who need to be working together to get out of this region of space. McCoy takes himself out of the equation early in the story, which isn't necessarily a move I can see our ship's doctor making under the circumstances.

The next story is an original one called "Deity" and sees Sulu tapped to lead an observational mission on a planet where the inhabitants have descended from birds. Of course, things go awry and the technology meant to keep our landing party cloaked fails, thus violating the Prime Directive all over the place.

Meanwhile, a ship has shown up in orbit that is threatening things -- or is it? This is the most discouraging of the stories included here simply because it has some potential, very little of it realized. Some of this comes down to the artistic choice made for the bird inhabitants. Maybe it's the sports fan in me, but I found it hard to take the aliens seriously when they look like the San Diego Chicken. Another part of it is that the story feels a bit derivative of Next Generation 's "Justice" only without the scantily clad natives to distract us and that it's stretched to run over two issues.

Finally there's a one-shot story involving every doctor who has appeared in the Trek universe working together to stop a contagion that turns people to stone.

It's a nice idea and it's fun to see Crusher, Pulaski and Bashir working together on the problem as well as the older JJ-verse version of McCoy running around. And yet as much as I complained about "Deity" feeling stretched out, I kept feeling this one was rushed to keep the page count to one issue. It's frustrating that the story I wanted to spend more time with is the one that feels like it's getting the most short changed. All in all, the eleventh collection of the rebooted Trek comics is more misses than hits. But odds are I won't give up on the series just yet.

I have a feeling the comics may be used to set up some things for next summer's Star Trek Beyond. In the interest of full disclosure, I received a digital ARC of this collected comic from NetGally in exchang for an honest review. May 27, 47Time rated it liked it Shelves: comics-scifi.

It seems I'm not much of a Star Trek fan after all.

These one-shots aren't doing much for me any more. Kirk must order an open fire on the Tholians, making them hostile, but at least the ship is free to be on its way. Unfortunately, the mission goes wrong and the away team is surrounded by locals, the rooster-like Felidae. The huge ship attacks and the Enterprise retaliates, forcing it to retreat but only after the offering is beamed over and then returned to the planet. Dec 10, Jesse A rated it really liked it Shelves: graphic-novels , star-trek , the-keeping-stack.

This was one of the first volumes that went places that really only a comic can go. Still tons of fun. Feb 18, Jeff Lanter rated it liked it Shelves: graphic-novels.

While I really enjoyed the previous volume, this one was a bit more on the average side. Only one of the three stories really grabbed me and the last one, with none of the newer Star Trek characters felt a bit out of place. 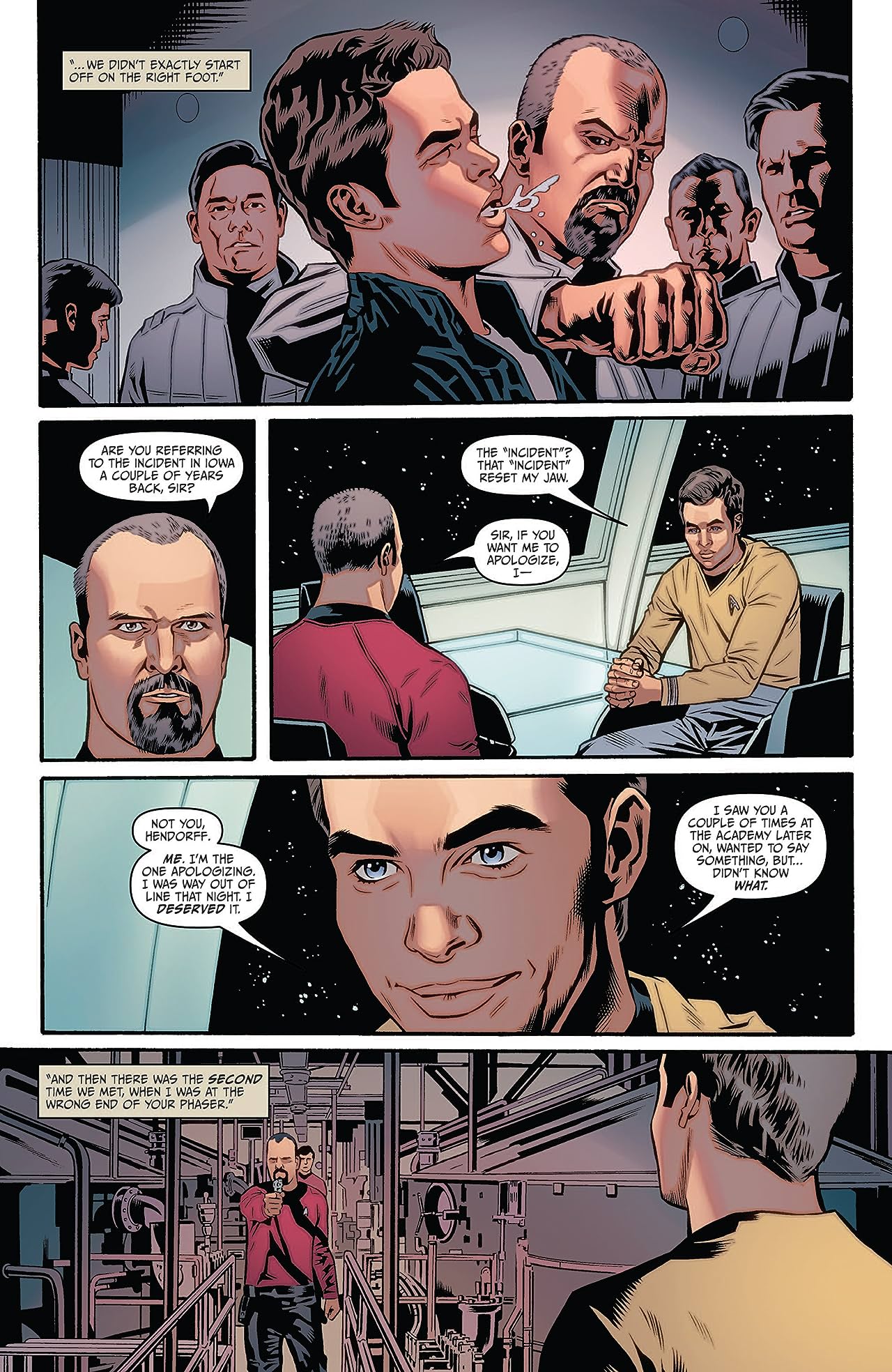 I'm not sure why there was a one issue story with "legacy" or pre-reboot characters in it either. That isn't to say it was bad, I liked Flesh and Stone better than the first story which seemed a little contrived and wrapped up just when it was starting to get good. I do think While I really enjoyed the previous volume, this one was a bit more on the average side. I do think that the art was overall better than the previous volume. Hopefully the next set of stories are a little more interesting and of a higher quality but even if not, this was still a fun and satisfying read.

The artwork could be a little better, but I found the story "Deity" to be interesting. I also enjoyed Uhura getting more of a role to play.

The last story is the special story, and features all the main docs from the Star Trek television series. Including Kate! Apr 21, Aron rated it liked it Shelves: comics , st-comics. The first story was a fair retelling of the 3rd season episode The Tholian Web, which was just that, Now the second story "Deity" was a dissapointment, I felt like this could've been great because there was some solid framework for a cool ST story there but the writing fell short. It seemed like maybe trying to contain this story within 2 issues just wasn't enough to do it justice.

It featured all the ST Dr's from every series, in which they combined their talent to combat the illness. It was pretty good, I think it was probably the best story in the book. Apr 29, Peter rated it liked it. I'm not the biggest fan of the nu-Trek universe but it is interesting to see their interpretation of events that happened in the prime universe. What I liked most about yhis volume was the inclusion of the one-shot Flesh and Stone which had the CMOs of all 5 series working "together" to solve a medical mystery.

Jul 30, Zuzana rated it liked it. Re-hash of Tholian Web - meh, first Sulu's away-team command - nice, all the medical officers Crusher, Pulaski, Bashir, Phlox, Doctor and McCoy team-up - loved it not for the story but for nostalgia effect. Oct 24, Vince rated it really liked it.

While I've thoroughly enjoyed Johnson and crew's Kelvin universe Trek, the Tholian Web retelling seemed thin, though the bonus episode of the main universe comic that invoked the Tholians did more with it. Four stars. May 09, Nicolas rated it really liked it Shelves: graphic-novels , star-trek.

Another collection of good stories. The medical story set in the prime universe was a nice surprise and a real standout. Jan 18, Daniel rated it liked it Shelves: graphic-novel-comic , star-trek. Products of this store will be shipped directly from the US to your country.